I own several MIDI controllers already, so why would I consider another one? Well the new Akai MAX49 actually has a few tricks up it’s sleeve that at least from the outset looks to add some new functionality rarely if ever seen on a MIDI keyboard controller. If you’ve followed along with the news you know the short list I’m talking about:

Thanks to the kind folks at a retailer that shall remain unnamed, I had the opportunity to play around with one for a a short while, and here are my initial thoughts.

The construction is very solid. It feels like it’s well built and could withstand significant abuse. Not that I would recommend it of couse, but if you are considering this as a MIDI controller for the road it could be important. The fact that there are no knobs or faders sticking out also add to the impression of a controller that could stick with your for quite some time. The buttons that do exist have a satisfactory, clicky feel to them that also feels solid. Thanks to excellent use of real estate the actual footprint of the unit is also really small. In fact it’s one of the smallest fully featured 49 key controllers I have ever used. An important point if you are in a home / bed room studio setup…

The keys feel very solid too, quite different from the ones on the MPK 49 which have a much softer, ‘synthier’ kind of feel (which I prefer to simply call cheap and crappy, but that’s just my preference…). The MAX49 keys have enough stiffness to make them easily playable fast without the risk of hitting adjacent keys by mistake.

The pads are wonderfully responsive and light up beautifully. The fact that they have little cut out letters for the shift functionality is a great detail that makes the keyboard a lot more usable in a dark room / on a stage.

I’d also like to point out the rubberized mod / pitch wheel which also feel like they could withstand a lot of heavy dubstep wobbling without a flinch.

The included Akai Connect software and the Program Editor install easily. I tested this on an iMac with Lion 10.7.5 and there were no software glitches during my tests. While the software might not be the most beautiful to behold, it does the trick and is easy to navigate with a minimum of fluff.

The CV out capabilities are certainly an added bonus though it will likely only appeal to a certain subset of synth heads who have an affinity for analog gear.

If you do count your self to this category the MAX49 could be an excellent way to interface with your old gear, including routing MIDI sequence data from a DAW via the keyboard to your other synths. Be careful with the specs though since not all gear uses the same CV specification.

While ‘Solid’ is the best word to describe the overall construction of the keyboard, this solidness also makes the unit rather heavy. Compared to other controllers such as the Novation Impuls or SL MK2 the unit has significant weight, which could be a problem if you are weak (meh) and need to lug it around a lot.

While the key bed feels well built and has stiffness, it was actually so stiff that it felt like it would wear out my fingers within a couple of hours of playing. This is likely a combination of my preference for keys like the Moog Little Phatty or the Novation Ultranova, and the fact that the unit was brand new. Give it some time and it would probably loosen up.

As with the key bed, the wheels are also surprisingly stiff (perhaps no dubstep wobble after all, at least not a fast one…).

The built in arpeggiator is rich, with a vast array of options and expression capabilities. Unfortunately I found it to be quite laggy, often dropping a beat or missing a note if I did fast chord or note changes in the middle of a pattern. I plugged in a Novation Impuls 25 and tried the same kind of ninjutsu, but without any such hiccups. A future OS update might change this behavior, which frankly felt more like a bad design decision than an actual bug. (Kind of like ‘let’s let each pattern finish or drop a beat if the notes change in the middle of it’.) 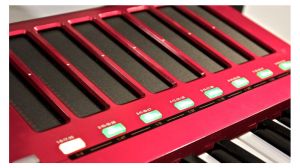 The touch faders are one of the most visible and often cited features of the MAX49, and while they look great I sometimes found it hard to get them to react to my ‘dragging’.

I would place a finger on top and drag up or down, only to find that as soon as I lifted my finger the value would return or jump all over the place. Perhaps an early adopter problem that will be addressed in a future OS update. Perhaps it takes a while to get the hang of how to use them?

The Akai Connect software is a great tool for editing the supplied factory DAW programs or creating new ones, but when it comes to actual DAW integration (such as having Ableton Live recognizing the controller) be prepared to do some terminal / finder file copy/pasting before Live will map properly with the ‘Live Program’ supplied in the keyboard.

I did get it to work though after some juggling. Granted I only tested it with Live, but for a controller that touts ‘Automatically Maps’ as selling point, DAW integration could definitely be a smoother process.

The documentation also deserves to be called out. The included manual is depressingly thin and really does not go far in terms of explaining how to set up or work with the unit, instead it often refers you to either online documentation or the docs included in the 2 editor software packages that come bundles with the MAX49.

It also fails to mention such minor but important things like why the touch faders will sometimes only show the LED for the current value instead of a full row (Hint: Plug in the wall plug in addition to the USB cable and they show up), or why after selecting a program the main display just sits there flashing the program name (this is by design) leaving you asking your self if you actually loaded a program or not.

You either love the red color or you hate it. It’s that simple…

Overall the MAX49 is a solid MIDI controller with some tricks up it’s sleeves that will cater to certain audiences. Some forward looking new features like touch faders combined with rich expression control (the sequencer is a lot of fun) and a nod to the past (CV out FTW!) makes this controller stand out.

Early adopters will suffer some of the minor hits like lackluster documentation and sometimes glitchy faders and arpeggiation, but I’m sure Akai will work those issues out with a simple software update in the near future.

If I had a lot of analog gear that I needed a rich interface for, or a need for a small footprint 49 key controller, I would probably get one of those and stick it out until the OS is upgraded.

You can get it from Amazon at the following link, which is also a great way to support this site:  Akai Max 49 Advanced USB/MIDI/CV Keyboard Controller

What do you think? Cancel reply

This site uses Akismet to reduce spam. Learn how your comment data is processed.